The most part of cultivated grapevines suffers from diseases caused by fungi, virus, phytoplasmas and insects against which the plants have no intrinsic resistance. The protection against such pathogens demands heavy use of pesticides, especially in temperate areas of our planet where rainfall and humidity rate are relatively high. Even though the active substances employed in plant-health control are more respectful of the environment compared to those used a few years ago, viticulture still remains one of the most impactful human activities. In this context lower use of agrochemicals and the preservation of natural resources have become a priority.

One of the major solutions to these problems is represented by resistant grape varieties (“PIWI”, German acronym of Pilzwiderstandfähig, which means Disease Resistant Grape Variety). These grape varieties are obtained from natural breeding between European Vitis Vinifera and a selection of wild Vitis of American and Asian origin which are resistant to fungal diseases.

Since the mid Nineteenth century, with the arrival of phylloxera and other diseases, breeding has become a necessity in order to avoid the extinction of viticulture itself. In 1890 the first crossings between American Vitis Labrusca and European Vitis Vinifera were carried on; the results were unsatisfying in terms of quality (e.g. strawberry grapes) and slowed down research projects in this field.

Everything changed in the Fifties of the last century, when a new strong interest in this field pushed research forward. The new vine plants had to be able to resist to water scarcity and fungal diseases, so new crossings were made between European Vitis Vinifera and Vitis of Asian origin in various research institutes in Central and Eastern Europe (for example in Friburg and Geiweilerhof institutes in Germany, Novi Sad University in Serbia, Brno University in Czech Republic, Eger Research Institute in Hungary). Multiple breedings between different grape varieties were carried on and the most resistant hybrids suitable for wine-making were pushed forward. Today grapes and wines obtained from resistant varieties are perfectly correspondent to traditional grape varieties registered in the national catalogues. 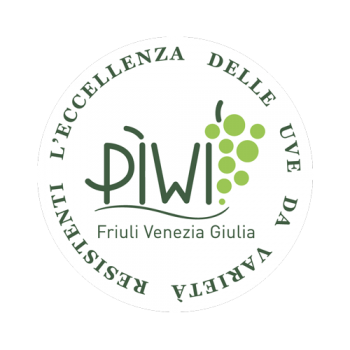 The association was born in 2018 with the aim of bringing together the best experiences of resistant grape varieties wine-making in Friuli and promote exchange of information in this field. Terre di Ger is a founding member of the association. Discover more about PIWI Friuli Venezia Giulia by clicking on the link below.

Don't miss any of our winery's activities and events and get special discount on our online shop!